Why is there such a huge price range in precious stones? That question contains an incorrect term, so I’ll clear that up first. The old term “precious stones” is no longer used. Now, something is either a “colored gemstone,” i.e., a gemstone that is used in jewelry that has color to it, or it is a “colorless or near-colorless stone” such as a diamond or white sapphire. Truth is, there are many shades of naturally occurring diamonds and sapphires from pink, yellow and blue to brown and even black. So, it would be wrong to say that a stone is either a colored gemstone or a diamond. Nonetheless, when we talk about gemstones, we are either talking about inorganic species of stones like ruby, tanzanite, emerald and tourmaline. Or about organic gems such as coral, ivory, fossil ivory or bone and pearls.

The C’s of Gemstones

But anyone who has ever shopped for gemstone jewelry knows that there are expensive diamonds and less expensive ones. So, what is the difference? We have all heard about the C’s and they are certainly important to pricing. A diamond with super clarity and no inclusions is rarer and considered more valuable because people like clear sparkly things. Therefore, this clear stone is thought more desirable and is priced as more valuable. Color in stones also affects pricing. Grass-green emeralds and deep magenta rubies are considered optimal and more sought after, so they are pricier. And other stones have similar rules attached to them. A pale aquamarine is not as pricey as a vibrant blue one, but a pale diamond (if it isn’t a colored diamond) is considered better than a slightly blueish one and might cost more. The cut of the stone can also determine price. And if the stones are faceted (polished to have little geometric angled planes that reflect light), then the cut is very important because certain depths and widths and cuts provide better proportion and show off different stones to their best. Not all gemstones are faceted. Some are cut and rounded smooth or even flat, but the polish is still important since we want the polish glassy and not rough or pitted. And the depth of the stone still matters since it will show more color and light play than with a thin stone. 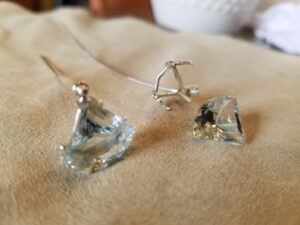 If you look back at those 3 C’s, you will notice that only the last one, cut, is actually an objective quality. A poorly cut and polished stone with no depth and bad proportion is just not as shiny and doesn’t look as nice. The other two C’s, clarity and color, are completely arbitrary. Of course, they follow standards set by the jewelry industry, its miners, cutters, vendors, designers, and artists. And, for the most part, these standards have been agreed upon by the end consumer.

Another factor that can affect price, though it depends on the gemstone, is shape. Some shapes are cheaper because for the gem cutter, it is more economical to use material a certain way. A flat-topped emerald cut is one of the more expensive cuts because it requires more of the material to be cut away. Some cuts, like a square or round princess waste less material and are less expensive. But shapes that the gem industry typically cuts certain stones in is more indicative of pricing. We commonly see natural emeralds cut into ovals, square and rectangular cushions, or pear-shapes. Finding a round princess-cut emerald is a challenge. Finding an even rarer shape like a marquise will probably cost you. Of course, in the industry we can get any stone cut in any shape or size, but custom cutting is going to add lots of zeros to the price. 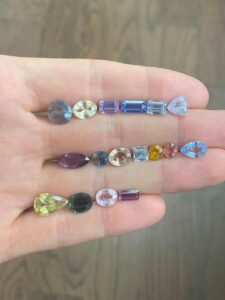 Sapphires Come in All Different Colors and Shapes

However, perhaps these standards don’t need to be heeded in all cases. Consider this: a brown speckled diamond that comes right out of the ground with a few natural facets may not be a crown jewel but it is still a diamond. And if you’ve ever seen these little stones, which we refer to as “raw diamonds,” sparkling like all the stars in the sky, with textures, speckles, and different colors shot through them, you will literally gasp. I’ve seen cases of them at wholesale gem shows and they are outright spectacular. They do not have clarity. Their color is either muddled or unnamable. They look like salt and pepper, or star dust, or whatever, but they are diamonds. And diamond is the hardest substance on earth and it sparkles like crazy. Who cares if it isn’t clear? Unless you’re an expert, most people can’t tell the difference between a clear diamond and a nice synthetic moissanite. 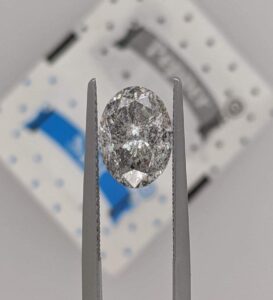 Emeralds also come in a range of colors. Some are bluish. Some are dark green, some are minty. Most have speckles and inclusions in them. In fact, one of the ways you know an emerald came out of the ground is from the types of inclusions in it. But maybe you don’t care if yours has a few more. I have seen stunning pale aquamarines, almost totally clear, that are just gorgeous. And I’ve seen sapphires in all different colors that have very little clarity but still have super sparkle and great color. And pearls (which I talk about in my article ……) can be almost any color and can be shaped anywhere from perfectly round and smooth to oblong, rice, flat flake, or baroque blob shaped. But as long as they are natural pearls and have a nice glow and luster, they are lovely. 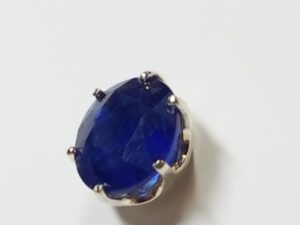 And yet, in these last examples I’ve given, the jewelry industry says that those gemstones are not worth as much and so don’t cost as much. A natural Tahitan sea pearl can cost thousands of dollars, but a nice strand of freshwater pearls can cost a couple of hundred. I’ve bought rubies, emeralds and sapphires that would cost a hundred times more if they had had optimal color and clarity. But I repeat, they are still rubies, emeralds and sapphires. And in my opinion, they are still gorgeous. In fact, because they are not perfect, I think they are even prettier. To me, the imperfect appears more natural. The color is something that stone formed with, not something that was achieved through radiating or heating the stone manually. Not that these things are bad, they can enhance a stone considerably, but natural stones are just … cool.

And that brings me to the final aspect of a gemstone that affects pricing. Size. Notice that size is not included in the 3 C’s and yet it is probably the most crucial aspect of a stone. Teeny diamonds are pretty, sure. In a pavé setting (which means “paved”) teeny diamonds set close together to pave a ring or pendant are fabulous. But there is something to be said for a big honking rock. And there are not nearly as many super clear, super colorless, super cut diamonds as there are teeny ones, so small is less expensive unless the other aspects of clarity and cut are so high that they affect price more than size.

So, let’s get to the point of all this talk about gemstone characteristics. In the end, it should be about what you like. What if you like super pale-colored amethyst? What if you think brown speckled diamonds are the coolest thing ever? What if you want a ruby that’s gigantic? What if you prefer teeny? In my opinion, jewelry is supposed to reflect our personality and show some artistic or aesthetic aspect. And for some people, artistic plastic or some other nontraditional material is just as desirable as diamonds or gold. That sort of thing is just fine, I think, but again, it depends on what you want. I like natural gemstones. It’s my thing. I learned from mentors who were gem traders, cutters and miners. I’m fascinated with the natural geology that forms minerals which make up gemstones. I think the fact that diamonds were formed in the lava tubes of ancient volcanoes is just the neatest thing ever. I think when you see a miner open a “vug”, which is a small cavity in which some minerals precipitated in and crystalized into tourmaline crystals the size of your hand is phenomenally nifty. And I love the idea that in a rocky desert copper can form veins of turquoise and silicon can form veins of opal. It’s just wonderful to me that we can find these things, polish them up, and wear them. It’s like wearing part of the earth, but way prettier.

In the end, jewelry should be what we like. And consumers should know that price is not in fact a barrier to owning lovely, natural stones.